Trajectory of Particles in a Boundary Layer
In a production line, a high-speed press punches holes in a strip of metal ribbon that is formed into electrical connectors for the automotive industry. The speed of the operation requires the metal to be bathed in cutting oil (ρ= 891. kg/m³) to cool and lubricate the punch. Insufficient local ventilation is provided and drops of cutting oil are ejected upward into the air with an initial velocity of around 30.
m/s at an angle approximately 150° from the positive x-axis. The injection point is x = 0.0, y = 1.0 cm.
The range of particle diameters is estimated to be 50 μm < D_p < 200 μm. Room air passes over the horizontal surface as a boundary layer in the positive x-direction with horizontal velocity component approximated by

where U_∞ = 5.0 m/s and 8 is the boundary layer thickness, which is equal to 10. cm. Above the boundary layer thickness (y > δ), U_x = U_∞ = constant. The air has negligible vertical velocity component. The workers claim that the large drops are carried far downwind while small particles are not. The plant engineer claims that that they are wrong – the large particles should settle close to where they are injected because of their weight, and no particles will be transported beyond about one meter from the point of injection.

To do: Use a numerical technique to predict the velocity and trajectory of these oil particles traveling in the given air stream.

The authors used Mathcad to perform Runge-Kutta marching. Trajectories for the two
extreme particle diameters (D_p = 50 and 200 μm) are shown in Figure E8.5. The 50 μm particles settle at around 0.74 m downstream of the injection site, while the 200 μm particles settle much further downstream, at about 1.8 m.
Discussion: The results show that the workers are right and the plant engineer is wrong. Unlike trajectories in air moving uniformly in the x-direction, the calculations show that large particles travel the farthest. The reason for this behavior is that large particles possess more inertia, and rise to greater values of y before their upward motion is damped by aerodynamic drag and gravity. At these large values of y, the larger particles encounter higher air velocities that sweep them farther downwind than the smaller particles. As seen in Figure E8.5, the 50 p,m particles never rise above the boundary layer, which is 0.10 m high. 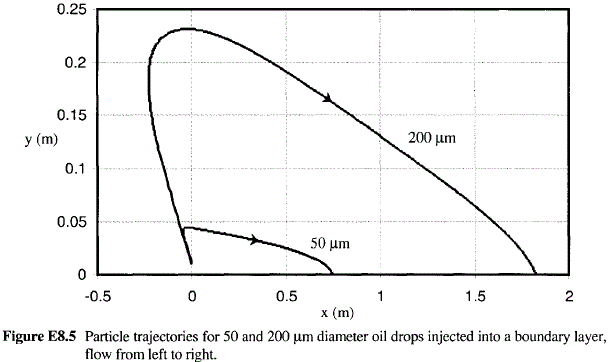